Need help with my latest MOC

Need help with my latest MOC

I'm building a robot that makes you chocolate milk (YAY!

I will try to explain the best I can.

Here's what supposed to happen: There's a motor that runs the pump and the switch. The switch is meant as an on/off switch (and to switch between different types of milk). When I tell it which milk I want, it switches to that, runs the pump, and the milk comes flowing down into the glass (because the air is replacing the milk. The milk has to go somewhere

Here's what's happening: When it switches to the right type of milk, and runs the pump, the milk flows fine, but at the switch, the OTHER type of milk (that's NOT being put into the glass) is flowing out of the other side of the switch. That's how the pneumatics switch is supposed to work.

So, I guess what I need is help on making a design that still has 2 motors (1 NXT and 1 PF motor), but can still pour two different types of milk.

I'm not sure about this, but I think you'd better get one of these: http://www.bricklink.com/catalogItem.asp?P=4694b .

I tried it, and when the switch is turned to one side, I'm not able to pump air through the other side. So I guess the same will go for liquids.
- Leon Overweel (aka. dimastero/ dimasterooo)

Well...I already am using that. I have no idea why milk is bubbling out

Maybe what I could do, is fill both water bottles with 2 colors of water and see which water is leaking! lol!

EEK, having anything other than air flowing through that pneumatic switch will mess it up fast!!!

Here's my recommendation, create a stopper that has two holes in it for each bottle. One hole is for the "air in" tube this tube should not extend much at all past the bottom of the stopper if at all. You do not want the end of the tube down in the milk. The other hole has a straw (or siphon tube) that extends to the bottom of the milk container. This is how beer kegs work, check the link for more detail. http://www.draft-beer-made-easy.com/keg.html
JimmyJam
"The more you know, the more you know, the less you know."
Top

I don't really understand. I think that's similar to what I'm doing already.

I think the problem might be that you have the bottles connected to the same output tube.

To begin with, pressure at the bottom of each bottle is created equal to the depth of fluid in each bottle.

If the bottles contain different depths of fluid or if one is higher than the other, it will try to run from the higher level one into the lower until the fluid surfaces are equal. (This is how the Romans used to set 2 points at equal level by using a tube and some water). Because the tops are sealed so no air can get in, they will not be able to achieve this but there will be some transfer of fluid from the higher to the lower bottle.

Presumably the output tubing you have employed is very narrow so viscosity and surface tension will slow this down and you might not notice it happening.

Because the tops are sealed, the fluids will also tend to drop out of the tubes until enough has run out to create a partial vacuum over the tops of the bottles. This will stop when the weight of fluid equals the external air pressure and take longer if you are using flexible bottles which can cave in slightly as the internal pressure drops.

Unless you use very narrow tubes so that surface tension stops air from getting up the output tubes, this vacuum will draw air in to replace lost fluid and it will just keep leaking. To prevent this, use long output tubes which go up until they are higher than the tops of the bottles then curve back down again. In this case, all dispensing will be by air pressure only and might stop when the bottles are nearly empty if the pressure is insufficient.

When you start the pump, the vacuum in the selected bottle vanishes and the pressure at the bottom of that bottle is now the weight of fluid plus the applied pressure and this forces the fluid down the tube down into the glass. Unfortunately, this same pressure is now also present at the base of the other bottle since they are connected. Because the air pump is quite powerful, the combined pressure will probably be greater than the weight of fluid alone in the other bottle and the selected fluid is forced into the bottom of that bottle and pushes the other fluid up out of the top (as well as tending to mix them together).

Keeping the air input air tubing at the highest point of each bottle will avoid any tendency for fluids to flow up the tubing towards the air switch and gum it up.

If you are using an output tube so narrow that there is no leakage, you might not even need the air pump. Just keep the tube straight down from the bottom of each bottle and the weight of fluid will force it out once you open the top of the bottle (using the switch) and destroy the vacuum. Slower and not nearly so controllable though. 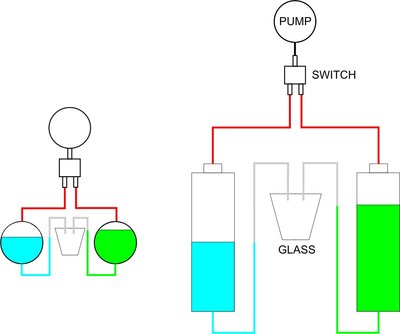 A sophistical rhetorician, inebriated with the exuberance of his own verbosity, and gifted with an egotistical imagination that can at all times command an interminable and inconsistent series of arguments to malign an opponent and to glorify himself.
Top

I posted this on EuroBricks and they suggested the same thing (but your had a picture, so you win.

I will try that!

Just a thought here but you do know that these pneumatic switches come with a lubricant inside that well, I would think is not for human consunption. Silicon ized chocolate milk yum yum. even the tubbing if not designed for human consupton can be hazardous. other isuues will be left over milk in the parts after the first day will rot, using this more than once...... you have the posioninator http://technicbricks.blogspot.com/2011/ ... oison.html
"Anyone who has never made a mistake has never tried anything new."
Albert Einstein
Top

That vending machine is a great piece of kit!

I assumed this new design was for demonstration and not actual use. If the switch is kept high enough (no reason why it can't go on top of the pump) then there should be little or no contamination.

The whole point of my layout is to avoid getting any fluids (other than air) near the switch. If there are still concerns, all the piping below the switch could be made out of wide-bore neoprene tubing so it can be cleaned between uses and standard car fuel filters placed on the switch outlets to catch any particles which might get blown through.
A sophistical rhetorician, inebriated with the exuberance of his own verbosity, and gifted with an egotistical imagination that can at all times command an interminable and inconsistent series of arguments to malign an opponent and to glorify himself.
Top

The video is very funny to watch. I think they had to much fun or was it dispencing beer? That may be in the end a better fluid to use as well since it has less chance of going rancid. Milk goes bad very fast at room temps, and the smell.......
"Anyone who has never made a mistake has never tried anything new."
Albert Einstein
Top
Post Reply
25 posts

Users browsing this forum: No registered users and 1 guest