I'm a little concerned with the lower steering knuckles too. I don't think those #1 Connectors will hold much tension with a load on them, also I would caution the use of universal joints with full wheel torque.

I haven't done anything on this for 3 weeks... I haven't done anything on RICcreator for a week either...
So I worked a little on the steering knuckles today. I decided to keep the universal joints, I want to see how much they can handle before they break. I was very worried with using them for my Rollcage car project, but they did the job just fine. The wheels where connected with the motors in a 1:1 ratio iirc with one motor for each 2 wheels (no diff) and they where able to stall the motors without breaking. (They stopped slowly though, the motors simply weren't strong enough for what I was trying to do at that gear ratio.)

The wheels I'm using are quite wide, so to get the tuning point as close to the center of the wheels as possible the construction has to start inside the rim. There isn't much space however, max 3x3 studs.
This was the first design I came up with: 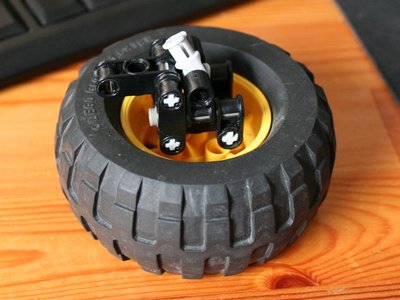 I will not break like the old, however it isn't that good. Notice how some parts are held in place without locking them properly together.

So I made another design: 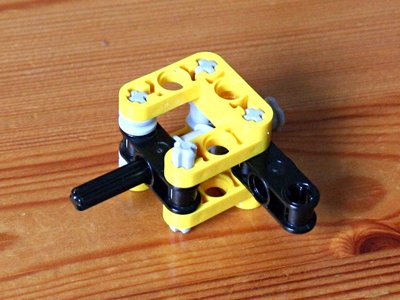 It uses angle Â½-beams to create a 3x3x3 cube. Much simpler and much stronger.

Implemented in the construction: I did try to do it without universal joints but I couldn't make it small enough to fit inside the rim the way I wanted to. If anyone can figure out how to do this I would love to see it.

I have finished the steered pendular suspension module now. I redid the body, simplifying the construction a little and improving the connection with the steering knuckles. In the old design the 24 tooth gears could touch some other parts when the construction was applied horizontal pressure. (It would not stop the gears though.) More space was given here so that the gears will always run smoothly.
I added connections for suspension. I will connect the spring to it with a 2-3 stud long beam, this prevents it from getting to close to the gear and allows free movement in the other direction.
The steering is just like Sariels design. It doesn't run that smooth though, I think the 16 tooth gear is pressed too tightly against the gear rack. So I might change this to a 8 tooth gear and add a 1x4 plate underneath the gear rack. This runs more smoothly iirc.
I took a few pictures while building the back module (which is just rotated 180 degrees), I can upload them if anyone is interested. I took them so it would be easier to make a CAD later on, so while rough it might be enough to recreate the design.

Next task is to build a pendular module for the center wheels. It will be 5 stud long instead of 7 and the drive axle will of course go all the way through this time. The reason it did not in steered module was that I stabilize the 24 tooth gear by letting its axle go all the way from one side to the other (and thus blocking the drive axle). To improve the stability in this module I will move the gear (and the differential) one stud outwards and have a beam in between the 24 tooth gear and knob wheel.
I will not add any connections to springs, actually I will make it possible to lock it to prevent it from moving at all. This way I can try both the spring less solution and the one with springs on the front and back wheel pairs.


I'm still a bit unsure of how I want the chassis connecting these modules to be. I find it quite hard to work with the NXT motors, their large size and odd shape makes it difficult for me to position them properly... Perhaps I should invest in some Large PF motors and converter cables for tasks where I don't need a the inbuilt rotation sensor?
I would like to attempt to place the motors underneath the drive axle like this: It might be a bit difficult to keep the length down, avoid it being in the way of the wheels when they turn and keep the gear train sufficiently strong at the same time. But if it succeeds the motors are nicely hidden away and will not get in the way of the steering axle.
My blog: http://spillerrec.dk/category/lego/
RICcreator, an alternative to nxtRICeditV2: http://riccreator.sourceforge.net/
Top

Good progress! I've got mixed feelings about having a pendular suspension on the middle axle. If it approaches a slope the center axle will lift off the ground. Maybe you don't plan on aggressive terrain? I would either go with a solid mounting of the axle to support the body or go with an independent style suspension to allow the wheels to droop or rise as the vehicle crawls up and down slopes. A split pendular independent suspension like what the Tatra trucks us would be as simple as you can get. You would only need a universal joint on the inboard end.

I don't plan on aggressive terrain at all, I intended to use completely flat terrain. I only did the pendular suspension because I liked the modular design. That is why I wanted the middle section to be a module too, even though I might just lock it up later on.
I do see the point of using independent suspension but I'm not sure if it is worth the trouble. If we have two surfaces which have an 30 degree angle against the other, it would require the middle suspension to be able to move over 2.5 cm in each direction if the middle wheels must touch the ground which is simply unrealistic for me.
My blog: http://spillerrec.dk/category/lego/
RICcreator, an alternative to nxtRICeditV2: http://riccreator.sourceforge.net/
Top

Did some work on this yesterday and today and it is finally starting to take shape.
I did the center module, 5 studs wide just as planned: I'm not completely satisfied with it, but I'm leaving it be for now.


Next up was the motor modules. The NXT motors shape really made this a lot harder. (Not that it came as a surprise...)
The motors are 5 studs wide, I wanted to use one stud between the motor and the center module for the construction. This didn't work out though. I could make the construction sufficiently strong enough, however no matter how I placed the motor it would touch the tires. An extra stud of width was needed to prevent this...
The other side which connects to the font/back wheel axises was even worse in this regard as the wheels can turn inwards. 3 studs of width were needed here, bringing the total width of the module up to 10 studs.

Dissatisfied I tried a twin motor module which ended up being 6 studs wide. It had to be 7 studs anyway since the wheels ended up touching each other when turning. It ended up lowering the limits of the pendular suspension though so I dropped it. 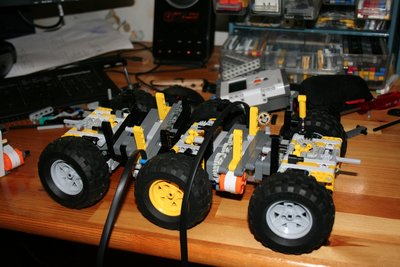 The drive is geared 4:1 which causes it to move a bit slower than what I wanted, but any other gearings is going to be tricky to achieve because of the limited space...
I'm again worried about the usefulness of pendular suspension, but whatever...


Next up is the chassis and the motor for the steering. I might decide to do some work on RICcreator first though.
My blog: http://spillerrec.dk/category/lego/
RICcreator, an alternative to nxtRICeditV2: http://riccreator.sourceforge.net/
Top

Sorry I was away for so long, buying a new house, and working in a new office takes a lot of your time away...

I finally have an Internet connection at home so here is what I have after nearly 1Â½ month. Which is about 5-7 hours of work later I guess... I'm quite ashamed I haven't done more than I have considering how much time has passed.

I finished the chassis along with the motor for steering. Even with the NXT placed on the very top, the center of gravity is low because the way the motors are placed. While this is great, I'm a bit worried about clearance...

Adding suspension is a first for me, so getting it right was a little tricky. The length of 5.5 was also a bit annoying but it worked out. I didn't want to place the springs vertically originally since I want to keep it low, but mounting them diagonally didn't quite work out. I will later try to place the horizontal beam on the outside instead of the inside, I should be able to place the NXT in-between the springs that way and reduce the height.
The way I planned to connect the springs so that the wheel could move downwards without being limited by the springs length worked just like I wanted.

I'm currently interested in how the center module will perform. As you suggested earlier, using some sort of independent suspension for the center axle might be better, not because of slopes but because of the way it is lifted off the ground when the front or back axle 'twists'.
I want to do actually do some testing before redoing anything though.

So my next goal is writing the software. My goals are: So my current plan is:
My blog: http://spillerrec.dk/category/lego/
RICcreator, an alternative to nxtRICeditV2: http://riccreator.sourceforge.net/
Top

I think it looks good as is

and I like the drop-out linkage on the suspension. Reminds me of what I've seen used for elliptical (leaf style) springs on some rock-crawlers.

Also I just thought of something, if you did use some type of suspension on the center module you could potentially lift the center axle off the ground. At that point you would have just the front and rear tires contacting the ground. This could be interesting if you managed to shift the steering to a crab mode, and drive the vehicle diagonally for a short distance.

Good luck with the programming, I'm good at the hands on part, not so much on the programming. However I did manage to (using the NXT-G software) create a small group of programs, which would accelerate/decelerate 5% at a time and then loop those programs to reach the desired speed. With a small time delay between the loops and some gentle tuning you can mimic a ramp up/down of larger PWM speed controllers that use "soft start".
JimmyJam
"The more you know, the more you know, the less you know."
Top
Post Reply
29 posts

Users browsing this forum: No registered users and 3 guests