Some friends and I started a first of its kind robot battle contest, where we use big ( around 6-8kg ) RC Lego Technic robots with tuned motors and controlled with 2.4ghz electric components. Everything is placed in a destructible LEGO city. We start that in 2 weeks in Kickstarter USA and deliver it as MOVIE production. Now some robotic fans which prefer not human controlled robots and friends not "battle" actions have made the suggestion we should use drones, autonomic robots for rescue and cleanup missions.

For the big robots I and the audience prefer piloted mechs and even because the ability and sizes of the electric components NXT is no match there, but for the small drone like vehicles we want to go with NXT and we also want to invite teams and single persons for that challenge. Even if they not have the NXT hardware we can support them with LEGO and NXT´s soon. The value just depends on the budget we reach on kickstarted. If it gets big we have for sure not enough man power to do all alone, so we have to find people building with us together.

Heres how the first prototype of a full size mech looks like: 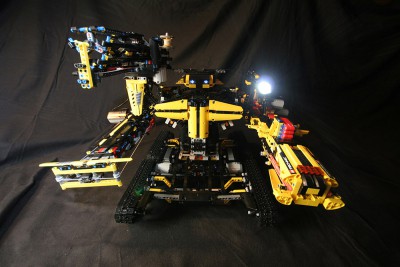 Inside the city the drones can do their job, cleanup, try to rescue or avoid color marked LEGO humans etc. And we can setup a reload / hangar for them, where they have to drive to get maintenance

I guess that would be a great challenge, and many people can try it, it not need that amount of material and experience as the big robots, or the flying LEGO quadrocopters we going to create.

Im looking forward to any kind of feedback,
and if you have questions just ask.

Rayjunx and his Nerd Team

Users browsing this forum: No registered users and 4 guests